As part of a restoration project on the historic Barmouth Bridge in Wales, we worked closely with contractor Alun Griffiths to employ an innovative bridge lifting technique. The new technique helps to minimise disruption and save time, contributing to a safer and more efficient construction process. 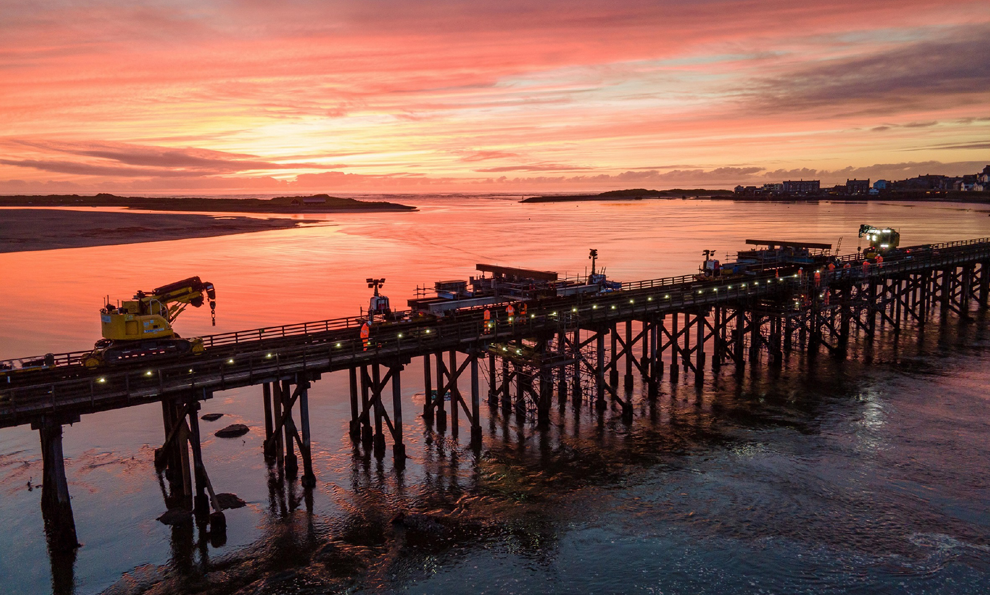 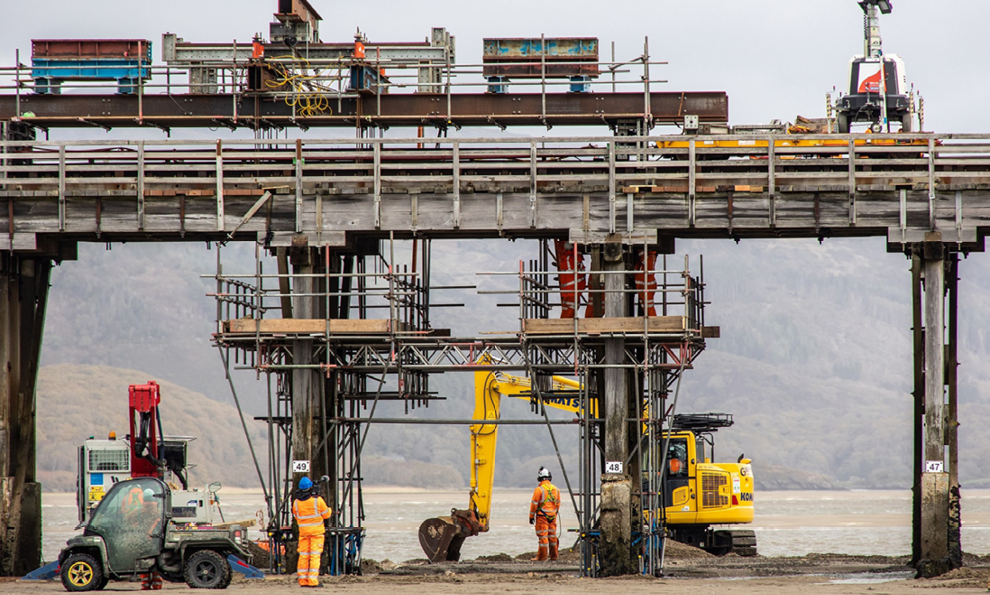 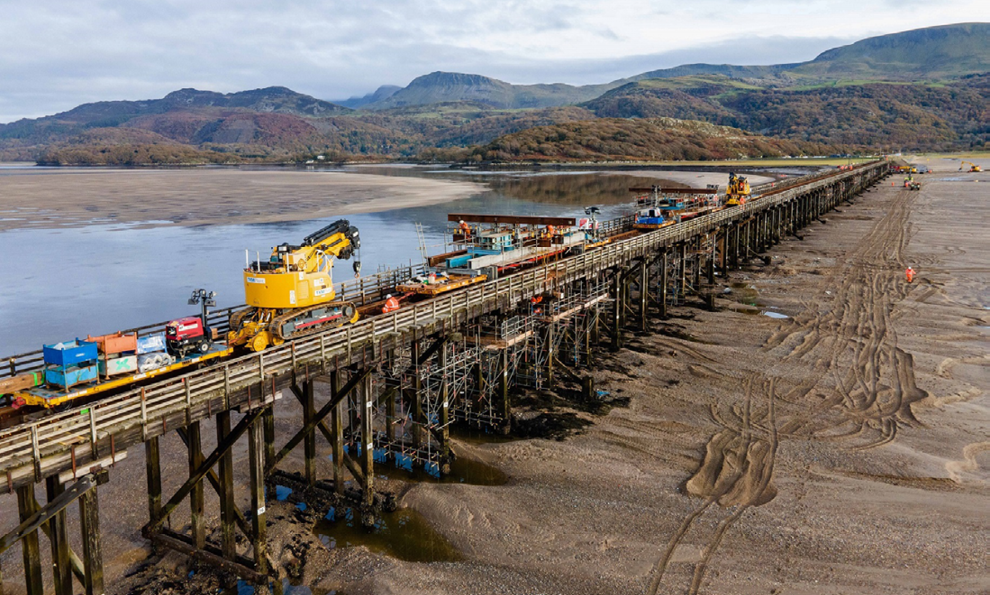 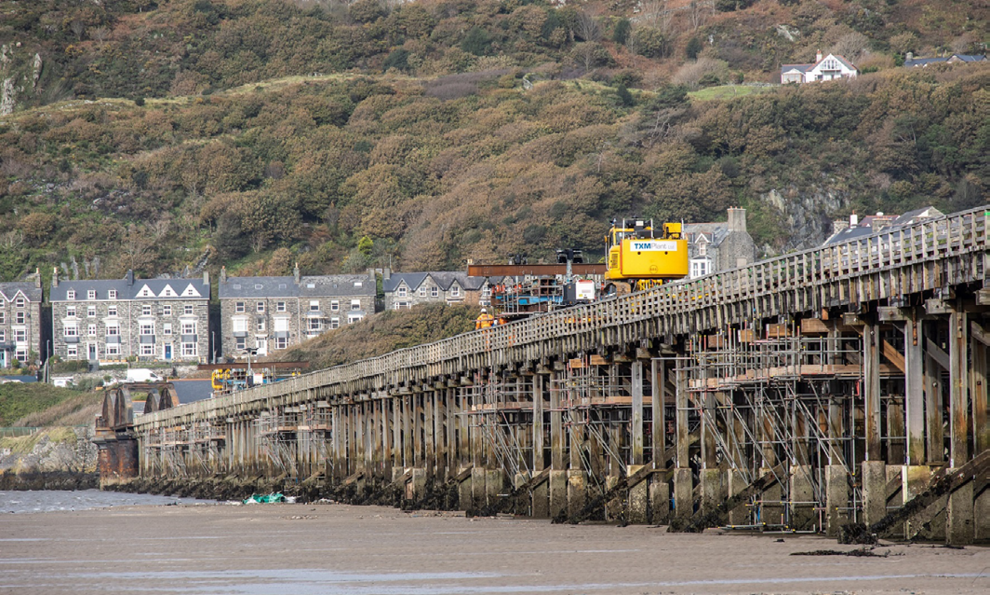 crossheads needing to be replaced

Given both its age and continued exposure to the coastal elements, the bridge was sadly in poor condition, with decay and corrosion having affected many of its timber and metal components. As a result, Network Rail announced a major programme of upgrade and restoration works, which will see the viaduct completely restored in a manner sensitive to both its industrial heritage and listed status, with components to be replaced on a ‘like for like’ basis.

As part of the restoration works, 24 of the viaduct’s crossheads were to be replaced, having become severely corroded. Led by civil engineering contractor Alun Griffiths, the project required the bridge to be lifted off of its piers, enabling the damaged crossheads to be individually removed and replaced.

With a substantial scheme of temporary works required to facilitate the bridge lift, we were appointed to design, supply and install the temporary jacking system. The bespoke system featured an innovative bridge lifting technique, previously pioneered on a similar timber viaduct in Gwynedd, Wales. 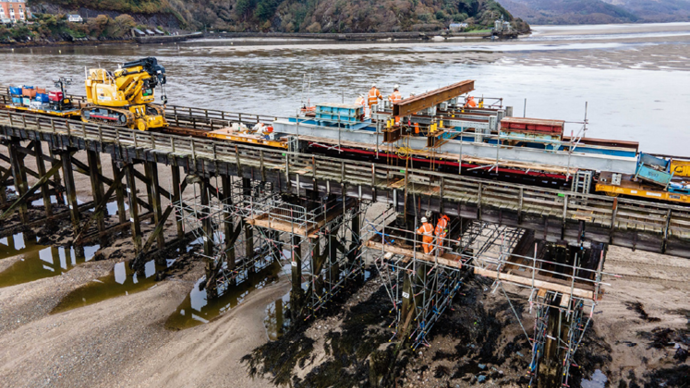 When working on live infrastructure, such as the country’s rail network, keeping disruption to a minimum and ensuring works are carried out as quickly as possible is essential. Initially developed with Alun Griffiths, Cass Hayward and Network Rail IP Engineering in 2019, our innovative system involves a combination of proprietary steel supports and jacks, which are built remotely and then transported into position.

Once on site, this approach enables work to be carried out on crossheads and support piers without having to strip the track and deck structures, allowing for a safer and more efficient process. There is also the potential for further time savings, as the whole jacking system can be simply moved along the track to the next pier, as opposed to having to dismantle and re-install.

As Barmouth Bridge featured a pedestrian bridge parallel to the rail tracks, we had to design the lifting frame with a bespoke cantilevered edge, in order to allow for this site constraint. Hangar bars were then dropped through each bridge span with the bridge jacked from the top side, lifting the structure off the piers below and supported underneath. This technique enabled all the main lifting work to be carried out on the top side of the bridge - especially valuable considering that the tidal estuary and lack of a foundation meant access to the underneath of the bridge was difficult.

An additional challenge on the project was the time constraints, with the work taking place during an 18-day closure of the railway. Given this tight window, the decision was made to supply two of our bespoke jacking systems. With our team of steel erectors on site 24/7 to ensure the lifts went smoothly and each jacking system operating from either end of the bridge, before meeting in the middle, we were able to complete the works at a far faster rate.

Our jacking system remained on site for 18 days, while Alun Griffiths carried out the necessary repair and replacement works on the bridge’s crossheads. The restoration programme continues on the Welsh bridge, with work expected to be completed in 2022.

The system worked well, with the crossheads being replaced in 12-14 hours without requiring removal of the track and walkway. Also, the full scale testing carried out by Mabey Hire assisted enormously.