A memorial for the thousands of crewmen who served in Bomber Command during World War Two has been officially unveiled in Lincoln. The Memorial Spire and Walls of Remembrance are the first significant developments in the creation of the International Bomber Command Centre. The walls record the names of the 55,573 men who lost their lives serving in Bomber Command. The Memorial Spire was designed by Stephen Palmer of Place Architecture and is now the UK's tallest war memorial. It is 102ft (31.09m) tall - the wingspan of the Avro Lancaster and the width at the base is 16ft (5m), the overall width of a Lancaster wing.

Mabey Hire supplied its Frami panel system to create the base of the memorial. Regional Sales Manager Michael Clarke said: "The main challenge was the accurate placing and support of the bolt sets for fixing the Spire. Had these been incorrect, the Spire would not have been able to be attached to the base. By keeping in communication with the customer and using the skills of the engineering team to deliver the required scheme, we made sure their needs were met."

The 31 metre high weathering steel spire, located on a hilltop overlooking Lincoln, is secured to the ground by a concrete base and can be seen for miles around. Lindum Construction used a Frami system solution 8.25 metres square and 1.3 metres high to form the 'mould' in which to pour the concrete for the base. The Spire represents the first phase of the construction of the International Bomber Command Centre - a lasting legacy to the 1 million people who served or supported Bomber Command in World War Two.

Mabey Hire worked very closely with Lindum Construction in order to meet all the clients' criteria. Together, we ensured that the most cost-effective, practical and safe design was supplied.

"The accurate positioning of the holding down bolt assembly was crucial to this project which was the reason Lindum chose to use robust and stable equipment supplied by Mabey Hire, who also provided vital support for the temporary works design."

"The accurate positioning of the holding down bolt assembly was crucial to this project which was the reason Lindum chose to use robust and stable equipment supplied by Mabey Hire, who also provided vital support for the temporary works design." 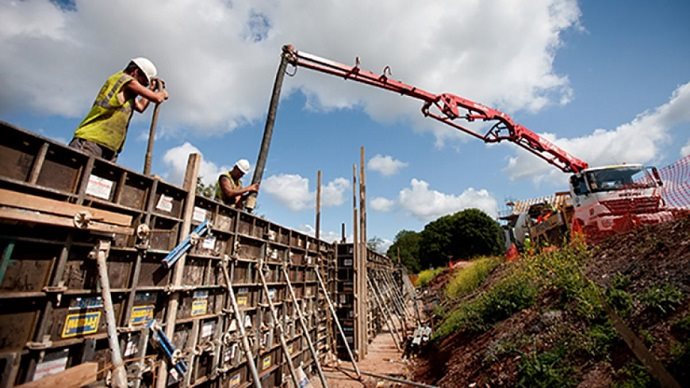 Our formwork and falsework solutions are used together to help our customers to create various types of concrete structures such as basement excavations, swimming pools, and many types of small structures including straight and curved concrete walls, columns, chambers, foundations and many more.