The redevelopment of the Severn Trent Water waste waterworks at Coven Heath near Wolverhampton featured numerous challenges that would make the project less than straightforward.

Initial borehole tests to the ground at the waste waterworks at Coven Heath revealed not only a high water table, but also several levels of poor soils – mostly stone and sand.

Other than the ground conditions, there were complications with the excavation itself. The redevelopment called for additional tanks to be added to the site. However, these tanks would have to be installed no more than 10m away from the existing humus (wastewater) tanks. The tanks are also circular and approximately 25m in diameter, which meant that traditional project designs would not be an option. 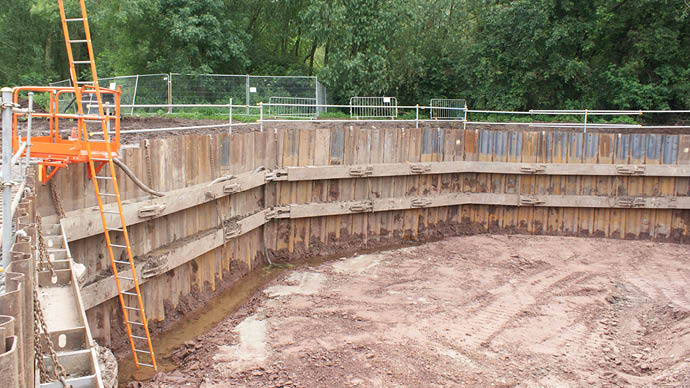 These extra conditions meant our engineers would have to come up with an unusual scheme to get around this obstacle. They created designs for an octagonal system using Super Shaftbrace legs - with 135 degree cranked corners - and 128 M12 overlapping trench sheets.

The excavation was then safe and ready for the next stage – the installation of the tanks.