Gravelly Hill Interchange is junction 6 of the M6 motorway where it meets the A38(M) Aston Expressway in Birmingham, known as spaghetti junction. It’s an area of the country famous for very heavy traffic and 2.5 miles of slip roads across 5 different levels. It also has 559 concrete columns reaching up to 24.4 metres in height.

Contractor Amey working with Highways England, contacted us in an emergency, as the suspended deck was in danger of collapsing through the bearing shelf of the table deck. This was due to the ingress of water, and the resultant damage caused by the expansion joints not working effectively. 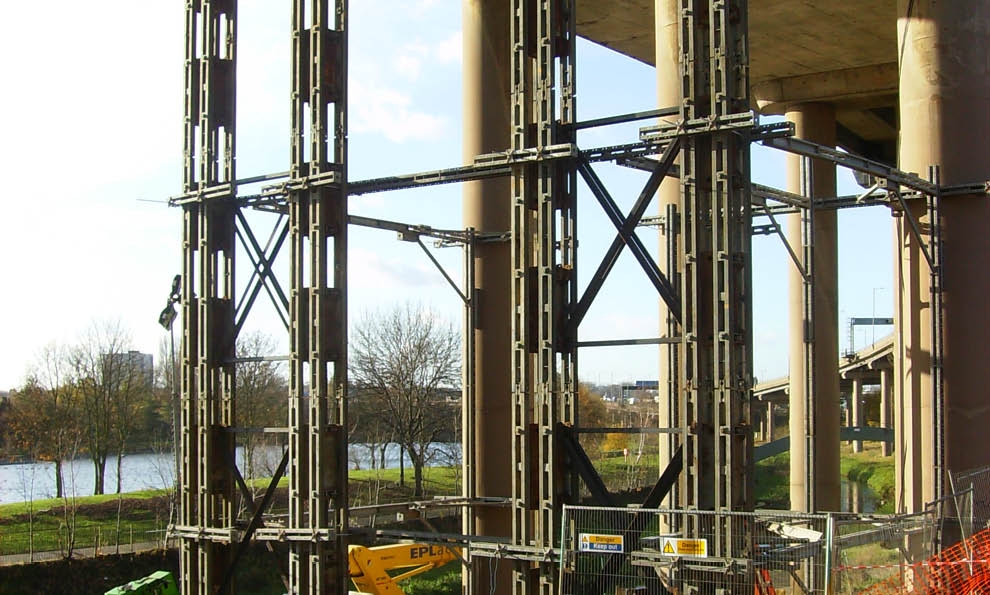 Another bespoke propping solution delivered to protect one of the biggest motorway junctions in the UK from closure
4–way monitoring solution to give real time insight to both temporary propping and load transfer to the new structure
Multi-collaboration between client, main and sub-contractors to build a new solution for Highways England
Complex project delivered on time

Quickly stabilise and prop the motorway section to prevent any collapse, whilst minimising any disruption to the M6.

The bridge deck itself was extremely sensitive affecting the temporary propping and the new bearings on the planned replacement concrete pier. So the work had to be carried out with great precision and care.

We had to create a monitoring solution that could assess structural movement of the temporary propping and any impact of transferring loads to the replacement new concrete pier during and post the build.

We worked with the Principal contractor Amey and main contractor Osborne to build a new permanent concrete pier to support the affected half joint and allow the temporary propping to be removed. 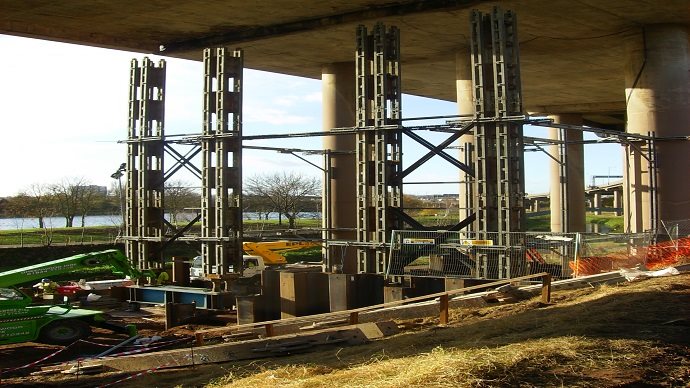 We were quickly on-site to inspect the half joint and our Mabey Hire Universal Propping (500 tonne capacity) was installed to protect the motorway and allow for a permanent solution to be designed and built.

The temporary propping was delivered on spread foundations with special bearings/ grillage designed and fabricated by ourselves to quickly create a solution. These temporary works supported the bridge deck while the new pier was constructed, as it was essential that any movement was kept to a minimum to prevent damage to the structure.

We also supplied Hymat jacks to lift the suspended deck, in order for remedial works to be carried out to the bearing and the bearing shelf. Once pre-loaded, the actual support of the half joint was carried out utilising hydraulic rams within the mechanical adjustable jacks at the base of the props allowing for a much more controlled lift. Actual prop force was continuously measured using strain gauges attached to the prop chords.

Highways England approved works to be carried out to construct a concrete pier to support the half joint allowing for the propping to be removed. As a precaution to possible changes to the bearing capacity of the temporary works foundations, we developed a structural monitoring solution.

Different monitoring proposals were developed for each phase of the works. Initially we monitored the temporary works during the construction of the new pier. Then we monitored the new pier after the load transfer had taken place to the new permanent pier to ensure that settlement remained within acceptable limits.

We employed a sophisticated computer controlled monitoring system to ensure that the loads and position of the temporary props were within tolerance at all times. And we monitored the temporary works and new permanent pier using four separate methods.

All four monitoring systems were fed into a logging system which captured data in real-time and sent it to the construction team. Any data that exceeded pre-set tolerances would trigger an alarm, which automatically sent an email to key personnel giving full details of the condition.

The system showed that thermal effects had a significant impact on both the prop loads and movement of the back site and column prisms. This was overcome by analysing background data and modelling the trends for each individual point on the structure, then applying a correction factor within the software.