JP Group Ltd of Tewkesbury were helping to create a petrol filling station at a new store in Wisbech, Cambridgeshire on behalf of Morrisons supermarket. A sizeable excavation had to be created to accommodate two 25.4m long tanks that would be situated underneath the eventually completed Morrison’s Petrol Station.

long tanks to be installed

A sizeable four sided excavation had to be created to accommodate two 25.4m long tanks in poor ground conditions
Our Supershaft Plus brace was capable of taking the load as no centre strut was needed

Long tanks measuring 25.4m had been installed before on other sites using Super Shaftbrace frames. However, it had always been possible to tie back (a rod or wire installed in soil or rock to transfer applied tensile load into the ground) the middle of the long legs with a ground anchor at least 6m back from the dig. Unfortunately, with the excavation situated along the A110, there was no opportunity to tie back and the team would have to find an alternative solution.

The ground condition was very poor with loose sands, gravel and a high water table so an Interlocking Trench Sheet cofferdam was essential, but the loads that were needed to carry with the high water table were substantial. It was not possible to make a twin frame of Super Shaftbrace work as normal in better ground so we had to bring in Supershaft Plus. 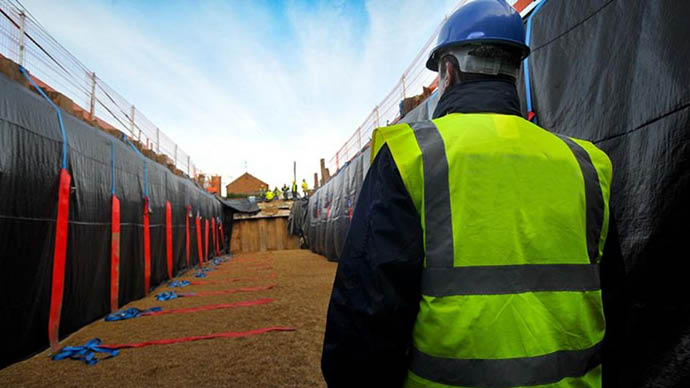 A job of this scale with the added complications of the excavation length, poor ground conditions and no way of tying back under a road that could not be closed, there was only one product to do the job.

Our Supershaft Plus modular hydraulic brace - a total weight of over 55 tonnes of equipment – would be needed for up to three weeks to support the sheet piled excavation to allow the placing of the fuel tanks at the site.

As this was the first job for the Supershaft Plus, which was new at the time, there was plenty of discussion with all parties prior to equipment being delivered due to the design requirements and logistics. Our engineering and sales colleagues arranged a site visit with all parties prior to the order being placed and the piling being delivered, to ensure that everyone knew what was coming to the site and when. JP had plenty of experience with Super Shaftbrace but needed to understand the scale of the new Supershaft Plus frames. The scheme comprised of a twin frame of Supershaft Plus on the long sides, with a twin leg of Super Shaftbrace along with a temporary strut while the base slab was cast.

Our Sales Manager said “We agreed to deliver a complete frame on each of two vehicles, timed to be off-loaded and placed straight into the cofferdam. All frames were connected on site and a Mabey Hire site demonstrator was present on site to assist with the installation of the frames.”

8m Larssen sheets were used by specialist sheet piling sub-contactor Ivor King. This was to ensure the required toe-in of 3500mm once the excavation consisting of – loose to med/dense fine sandy silt to about 1800mm over loose to medium dense fine silty sand with water was shown at –2500mm. Cleats were welded at intervals to provide support beneath the lower Supershaft Plus frame, before the brace was installed and linking chains were connected to the lowest rails. Timber packs were then placed on the lowest frame to allow for the installation of the upper frame, which then had hanging chains attached and was linked to its twin.

The frames were pressurised to support the sheets, which allowed the excavation to be dug out further and a base was cast in-situ. Once the base was capable of supporting a load of 70kN/m the centre strut could be removed. The tanks were then installed successfully, and the excavation back filled. The frames and sheets were removed without any problems.

This was a great first run for the Supershaft Plus, JP group were happy to be the first users of this new product and are looking forward to more contracts where it may be required.