Constructing one of Europe’s largest double storey bridges for HS2

We worked with Laing Murphy Joint Venture (LMJV) and HS2 to create an astonishing 40-metre-long, double-storey temporary bridge spanning across the River Tame in the West Midlands, providing access for heavy construction equipment and earth-moving plant. 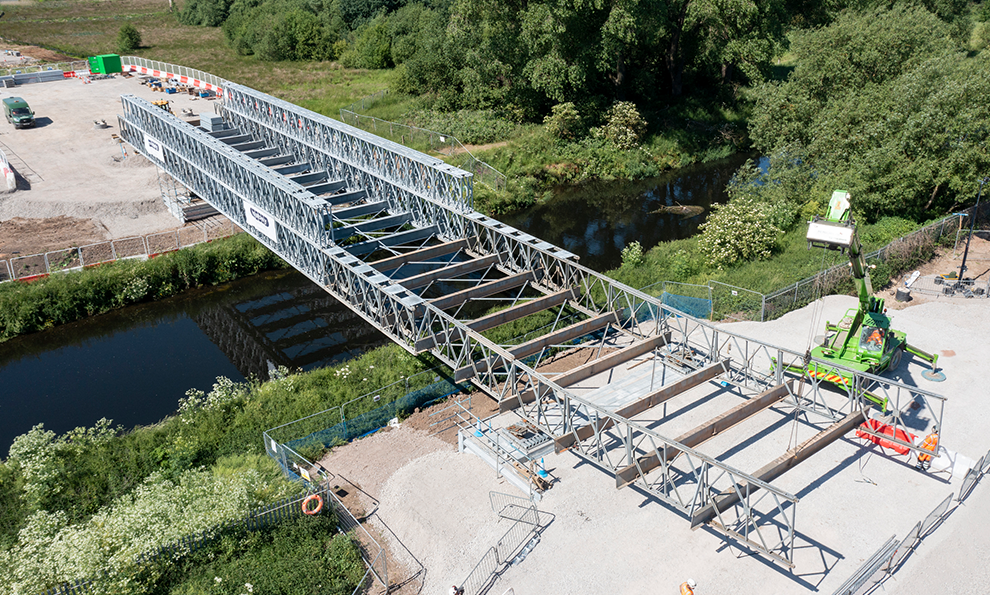 The double storey configuration of our bridge was specifically designed to accommodate abnormal loads and the physical size of large vehicles crossing it. In fact, since its installation, the solution has enabled the deployment of crucial equipment, including a 112 tonne mobile crane, a 118 tonne Axle Low Loader and a fleet of Volvo A60H articulated six-wheel haulers, weighing approximately 98 tonnes each, as well as other heavy plant.

Once the work has been completed, the structure – fabricated using Compact 200 components – will be dismantled for re-use on other projects, alongside the special Bolt-A-Bin® foundation cages, which are a more environmentally-friendly alternative to concrete foundations. Each abutment comprises a cellular structure formed from heavy duty corrugated steel sections, positioned within a carefully dug excavation and then backfilled with selected soil, compacted in layers decided by the type of material available in the local area.

The foundation cages, which our team built into the banks of the River Tame, measure 10 metres wide by two metres and go down to a depth of six metres to settle on stable subsoil layers. The design and construction of the abutments means they are able to sustain both the imposed loads and accommodate a significant degree of ground movement: including lateral and braking forces imposed by heavily laden vehicles.

The groundworks were completed by installing a steel grillage across the top of the abutments to help spread the load of the 7.3 metre wide Compact 200 bridge. The bridge was then launched from one side of the river; being pushed out across the water using a D6 bulldozer until the front end reached the opposite abutment. At this stage, a 360 Roto Truck was used to remove the lightweight nose from the superstructure before the installation was completed.

As one of the largest temporary bridges deployed in Europe in recent years, it is expected to remain in use until all the main construction work for the new high speed rail link is completed in the area.

This contract is the latest in a series of bridges we've supplied and installed, following our initial engagement with HS2 when the Government backed consortium was seeking to establish supply chain partners with the experience and capacity to work on the UK’s biggest infrastructure project since the Channel Tunnel rail links.

As a specialist in the field, we were delighted to have been involved in such a noteworthy project – one of the largest temporary bridge structures deployed in the UK for many years. We’ll remain involved with the project until the temporary solution needs to be removed and look forward to continuing to help the team meet its goals as efficiently and effectively as possible.