Wellington Bridge is located at Hatfield Peverel Bypass, north east of Chelmsford, Essex. It carries the B1137 single carriageway road over the A12 dual carriageway. Major repair works were required following two strikes by over height vehicles. The first strike happened, the structure was hit by the hydraulic arm of a grab truck heading southbound on the A12. The vehicle was travelling in lane one and struck the bottom flange of the cantilever span steel beam around 1.5m from the half joint. The second strike occurred a year later, when the structure was hit again by a hydraulic arm of an excavator being carried by a lorry, also heading southbound on the A12. 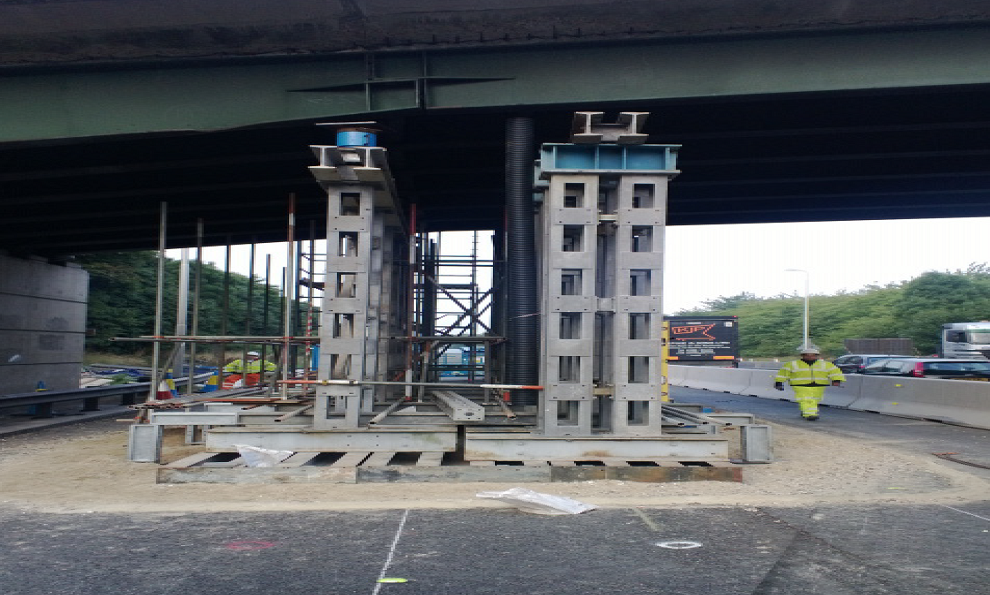 The superstructure comprises of three spans of composite steel beams and reinforced concrete slab decks.  The deck is 12.23m wide, the two end spans measure approximately 13m long and the central span measures 26.72m. The contract specification required that the structure was continuously monitored prior to jacking, during the jacking operation, while it was supported on the temporary works and post de-jacking. The specification also dictated that baseline readings were to be taken for 48 hours before any jacking works could be carried out and 48 hours after the final de-jacking.

Mabey was contracted to provide a propping and jacking solution consisting of Mat 125 and Hymat Jacks, together with the structural monitoring. The proposed monitoring solution was designed so that the bridge beams either side of the half joint are continuously monitored pre-works, during and post works; this was achieved by installing sensors integrated into the propping system that measured displacement, strain (load) and temperature all in real-time. The monitoring system was installed prior to any jacking works began; this logged any vertical movement and change in load of the temporary supports of the bridge beams due to diurnal variations. The reference datum used for the system was the carriageway below. Reference to the carriageway was made using draw wire potentiometers mounted on the propping steelwork directly down to the carriageway. After monitoring the beams for 48 hours pre and post jacking, the data was analysed and the trend between temperature and movement graphically analysed. Allowance for the thermal effects on the steelwork and hydraulics were accounted for within the program.

In the event of a trigger action whereby recorded values from any of the sensors passed a predefined limit value, the system was equipped to automatically send out SMS and email notification to the relevant pre-defined parties. This also included a Mabey Hire Monitoring & Instrumentation engineer who could immediately check the validity of the trigger and either countermand or respond as appropriate.