Following a vehicle collision with a bridge on Glanhwfa Road, engineers provided an expert propping solution, so vehicle and bridge could be safely removed

Leading bridge and engineering services specialist Mabey Hire has announced its work with Alun Griffiths to provide a bespoke and expert propping solution, supporting a bridge which was severely damaged following a lorry collision. The solution held up the bridge while the vehicle underneath was removed, then enabling the bridge to be fully dismantled and transported off for further investigation. Thanks to Mabey Hire’s rapid response, the road was re-opened just three days after the collision.

The truck was driven along the A5114 Glanhwfa Road in Llangefni when became wedged underneath the unused railway bridge, dislodging one of the support bearings from the abutment shelf.

Responding to a call from local civil engineering and construction contractor Alun Griffiths at 23.00hrs that evening, Mabey Hire’s team of engineers were on site first thing the following morning to assess the requirements and design a bespoke propping scheme.

The team worked tirelessly over the weekend to pre-assemble and then install Mabey Hire’s Mass 25 propping system which is capable of supporting loads of up to 250kN on a single leg. One corner of the bridge was supported while Alun Griffiths utilised a crane to lift the adjacent corner of the bridge, allowing the vehicle to be removed from underneath. 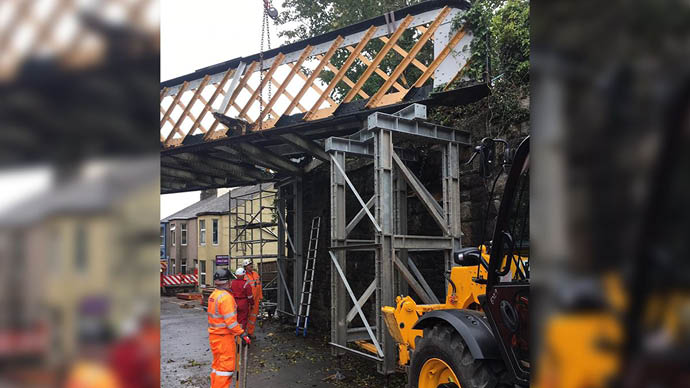 Once the vehicle had been removed, a Mass 25 support tower was introduced to support the main bridge girder and the crane used to set the bridge back down onto the support tower. A second crane was then introduced to facilitate a tandem lift to extract the bridge and set it down onto an awaiting vehicle. By Sunday evening, the bridge was transported and stored in a depot and the road was re-opened the following morning.

Steve Richardson, Contract Manager, Alun Griffiths, said: “Having worked with Mabey Hire on several projects in the past, we knew they would be able to provide the equipment, experience and expertise needed in rapid time. The tireless efforts of those involved enabled us to support and consequently remove the bridge safely and efficiently and get Glanhwfa Road back up and running in just three days.”

Gordon McDonald, CEO, Mabey Hire, comments, “This project is a prime example of our growing rapid response expertise, working with contractors to deliver an effective temporary solution in a tight time-frame. Thanks to our local knowledge and depots, we were able to install the propping system in just one day, helping Alun Griffiths and Network Rail minimise the damage caused and limit the time the road was closed for.”

Having worked with Mabey Hire on several projects in the past, we knew they would be able to provide the equipment, experience and expertise needed in rapid time. The tireless efforts of those involved enabled us to support and consequently remove the bridge safely and efficiently and get Glanhwfa Road back up and running in just three days.

Our Mass range is one of the most versatile modular shoring and propping systems available on the UK market. Our Mass 25 propping system has been designed with maximum flexibility in mind, using a large range of off-the-shelf components.