The benefits of EVE, our immersive design solution, have been highlighted on a Scottish Water utility project in Scotland, with the design technology bringing communication and efficiency benefits to the site. 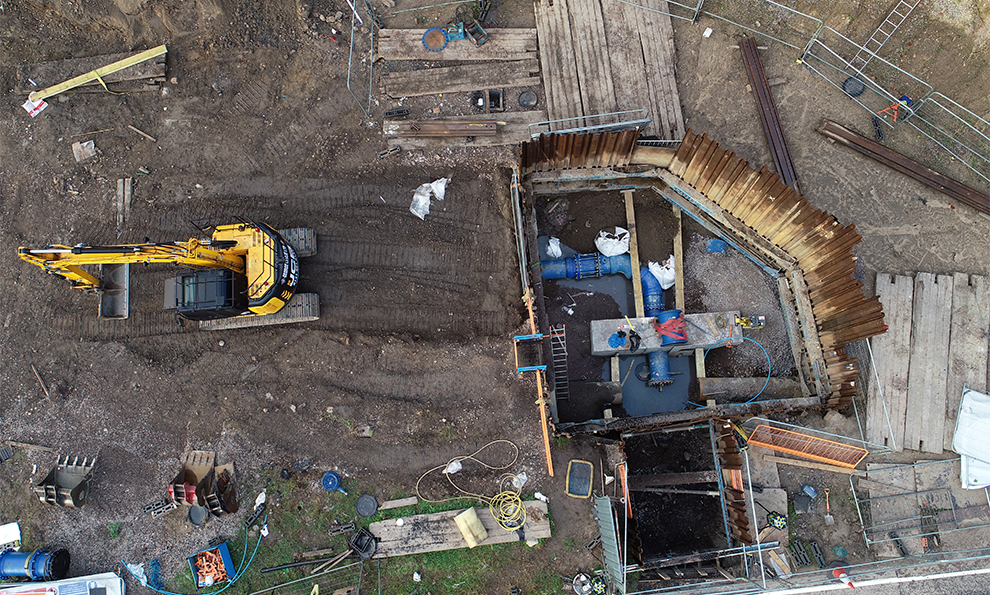 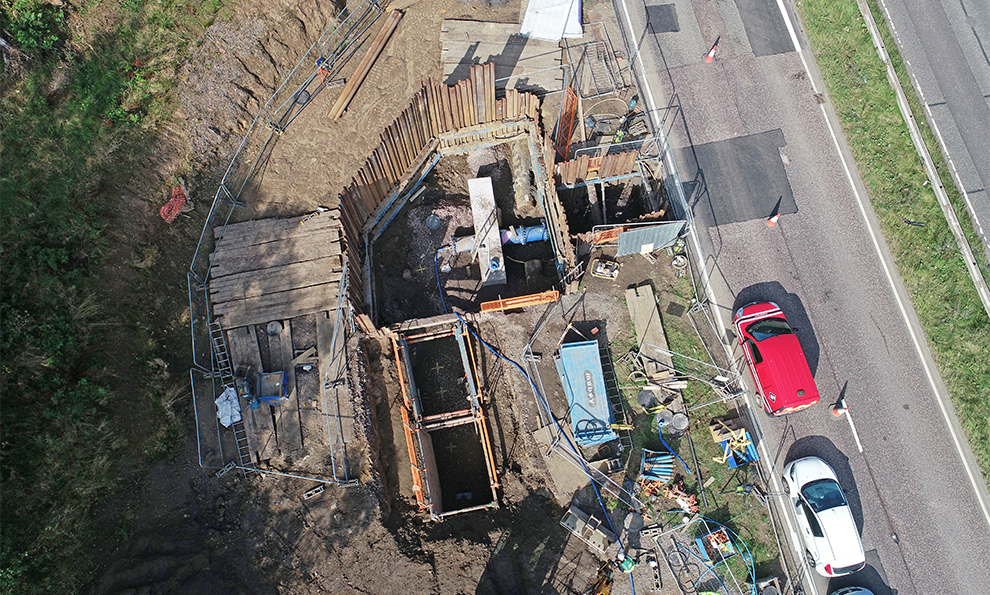 First project to use immersive design solution, EVE, on site
Two sections of trunk main pipe being replaced
Working around a variety of obstacles

Civil engineering contractor, George Leslie Ltd, is undertaking numerous infrastructure projects across Scotland; including road, rail, marine and bridge works, as well as wastewater and water treatment works, pipeline installation and structural repairs. Having worked with us before, the latest partnership between the two companies was on a Scottish Water renewal project in Happendon, Scotland, whereby two sections of trunk main pipe were to be replaced. It was here that our newly developed EVE technology was utilised.

George Leslie’s contract for Scottish Water involved relaying 1200 metres of new water main pipe in carefully planned phases/stages, ensuring that the water supply to residents across the area was maintained. However, the project wasn’t without its challenges. In addition to extreme care being required when connecting the new pipe into the old cast iron mains, the George Leslie team also had to work around a variety of obstacles, including close proximity to a busy dual carriageway, differing ground levels and existing live power cables that ran through the site.

It was for an excavation at one end of the site, where a large concrete thrust block had to be cast within a cofferdam, that the value of EVE truly came into play.

George Leslie’s Civil Engineer on the project, Scott McCaw, commented: “The cofferdam was a tricky element to the project due to its tight position, with the dual-carriageway on one side, multiple utilities within the verge and a large embankment on the other, as well as the live Scottish Water mains around us – meaning working space was extremely restricted. The 27-inch water main operating at 10 bar pressure was also another significant risk to be considered. It was these conditions that dictated the unusual five-sided shape to the cofferdam. 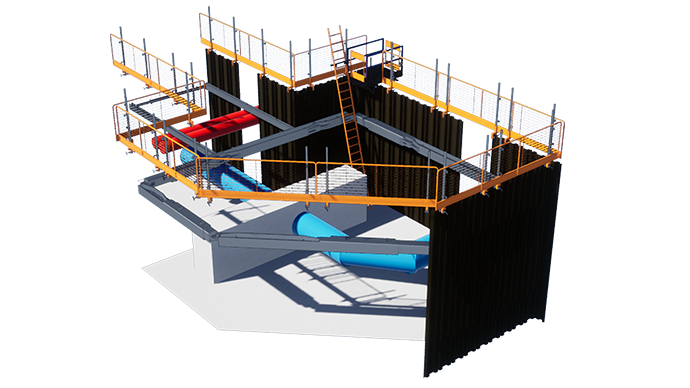 Scott continued: “Through the use of EVE, we were able to put all of this information into the model - including the existing infrastructure and various site constraints - and view it within the immersive environment. In turn, this visual demonstration helped us to consider the proposed temporary and permanent works design solution and assess its constructability, as well as enhance further project discussions, including the installation process and various health and safety factors.  We were really able to see the potential access issues and how all the various factors worked and fit around each other. For example, how can we get in there; what machinery can we use; how are we going to physically install the new pipe on site; and how will the two-metre social distancing affect this.

“EVE also lets you look at aspects such as the frame levels within the excavation - you obviously can’t have the temporary works clashing with any of the pipes we had to install. With EVE’s immersive visualisation, we were able to assess and determine the suitability of the temporary works in relation to the construction of the permanent. In this case, the permanent works included all the shuttering for the large thrust block needed to restrain the full length of the pipeline and prevent any loadings being transferred to the existing cast iron.”

As well as using it to aid the planning and decision-making phase of the construction project, EVE also proved invaluable from a communication point of view, as Scott explained: “As well as being used as a point of discussion during conversations about the scheme design and approach, the EVE model also really came into its own during site briefings. Rather than just reading off pieces of paper, we were able to present the project and the installation process to the workforce, providing a visual, virtual demonstration of the proposed works. Utilising visual aids, such as EVE, in this way really is the future – it’s changed the way in which we do things on site. 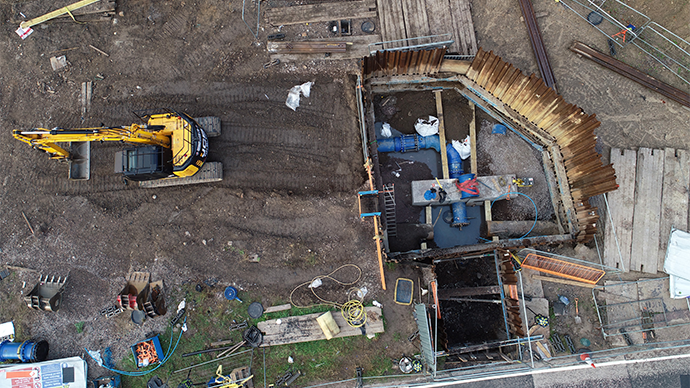 “On this particular project, given the unusual shape of the cofferdam, it was even more important that we were able to thoroughly brief site operatives on what they were going to be excavating and installing. With EVE’s immersive environment, it gave them clarity on what they were doing, why they were doing it and what it should look like. In turn, this helped to improve health and safety on site, with everyone having already virtually explored the site and coming to site with an existing awareness of the risks that were attached to it, such as the live services.”

With the pre-contract design work taking place while the construction industry was having to adopt new working practices in light of the Coronavirus pandemic, EVE’s user-friendly and flexible characteristics also proved valuable. In addition to the digital environment facilitating effective remote collaboration and coordination, George Leslie was also able to visualise the on-site implementation of the required two-metre social distancing.

Once the temporary cofferdam, constructed using our trench sheets and Multibrace frames, had been installed on site by George Leslie’s experienced workforce, it was in place for some six weeks. A second, conventional trench to the road-side of the cofferdam was excavated a couple of weeks earlier, supported by more trench sheets and Powershore hydraulically braced frames. The temporary works here were in place for a further month, while we also supplied trench boxes, manhole boxes, walers and other equipment to George Leslie throughout the project.

Scott concluded: “Overall, the installation of the project’s temporary works went really smoothly on site – thanks in part to EVE. The technology greatly assisted with the planning stage of the project, enabling us to better visualise the proposed works, forward plan and deliver an enhanced site briefing. Without EVE, it would have been far more difficult to discuss the challenges and our proposed design solutions with the client and other project stakeholders, which in turn would have had a knock-on impact on programme timings. Will we be using it again? 100 per cent. In fact, we already are.”