Simplifying propping to pier under viaduct

We were approached by Interserve to supply propping at one of the piers under the A14 Ouse Viaduct. This propping would enable the complete demolition and replacement of the concrete crosshead and reinstatement of the bridge bearings.

cost saving due to simplified approach

Under the A14 Ouse Viaduct, replacements of concrete cross heads and the reinstatement of the bridge bearings was needed
Our engineers reviewed the design brief, loading information and suggested an alternative simplified approach
The jacking was carried out and the structure was monitored

We were presented with a proposal by URS (the consultant working on behalf of the Highways England) involving the installation of stiff towers either side of the pier designed to resist all horizontal loads.

Our engineers reviewed the design brief, loading information and suggested an alternative simplified approach. This involved the use of a line of pin-ended struts either side of the existing pier, fully braced in the transverse direction (right angle to the direction), with all longitudinal restraint being provided by the existing piers. 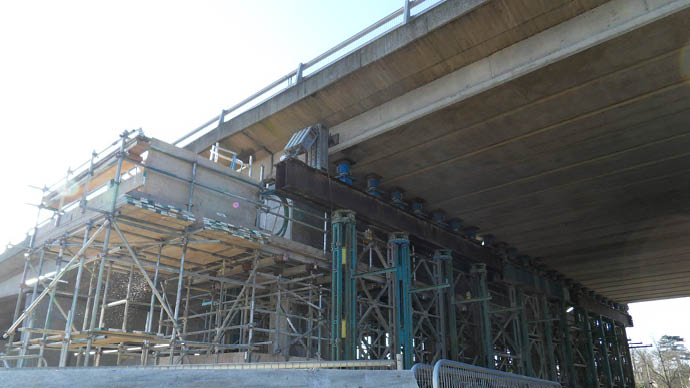 The jacking was carried out by our hydraulic technicians during a temporary road closure on the A14. During the jacking operation, the structure was monitored using LVDT sensors and pressure gauges connected to a pair of data loggers and viewed on a laptop computer.

Following completion of the concrete works, we returned to dejack the structure and dismantle the propping equipment.