The railway bridge on Swing Swang Lane in Maidenhead, just to the east of Basingstoke Station, carries the Southampton to London railway line. It was identified that the existing bridge abutment needed strengthening to remove line restrictions on the railway. Previous strengthening works included the provision of military trestling to support the railway live loading, but a permanent solution was now sought by Network Rail. 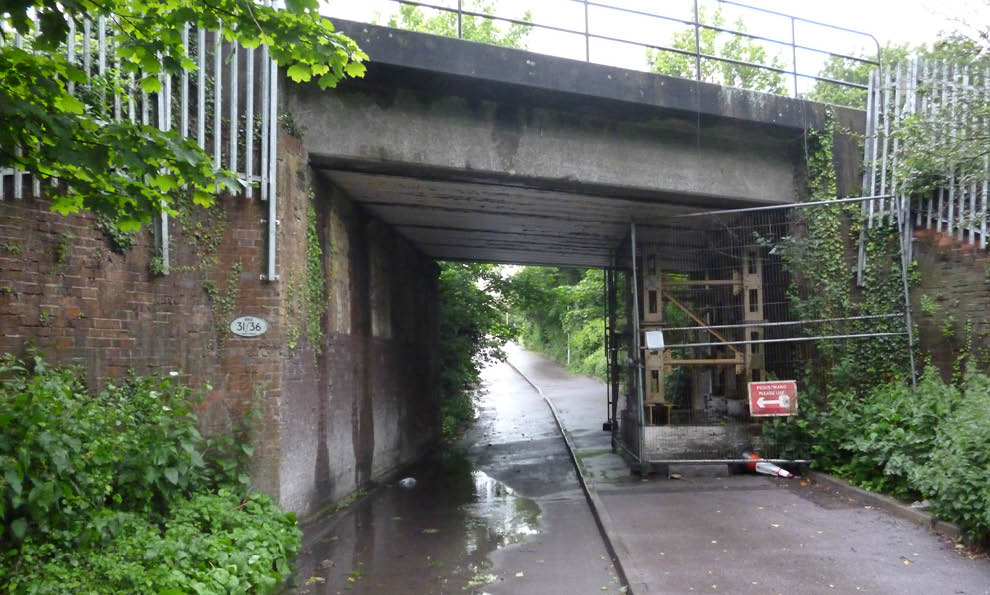 Osborne are the Multi-Function Framework (MFF) Contractor for the Wessex area. It was a collaborative delivery framework design to reduce costs and encourage engagement with the whole supply chain. The delivery team was known as “One Team Wessex”, and included personnel from many different companies. Swing Swang Lane bridge is situated just a few minutes’ walk from the new Network Rail Wessex offices in Basingstoke, and so this project was identified and prioritised very early within the framework. Due to our experience and expertise in this field, we were quickly engaged as a key delivery partner.

The scheme required the installation of a new steel beam, supported on temporary trestles, to support the bridge deck. Osborne would then build a new abutment wall to support this steel beam, and the temporary trestles could be removed. However, before this new steel beam could be installed, the existing propping system had to be removed. The existing propping system was in direct contact with the bridge soffit and taking load, so the transfer of load from the old structure to the new structure could only take place during a rail possession. 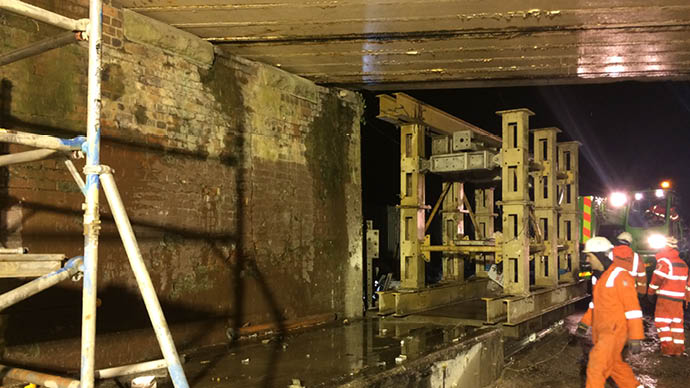 We were sub-contracted by One Team Wessex to remove the existing trestle, supply and install temporary trestles, and to supply, install and pre-load the new steel support beam to ensure full load transfer with the bridge deck. All of this work had to be programmed and instigated within a six hour railway possession.

We determined a method to release the existing trestle by jacking from new bracing members, sliding it out from under the bridge on temporary deck units, installing Mass 50 temporary trestles, and sliding the new beam into position using skates on a temporary Kwikstage tower. We had procured the new steel 8m beam weighing 2t on behalf of Osborne, and pre-loaded it using Hymat Jacks sited on the Mass 50 trestles. Once pre-load had been achieved, the jacks were mechanically locked off whilst Osborne completed the new bridge abutment.

With a restricted working window of six-hour overnight possession for all of these works, we established a detailed half hourly programme that was approved by Network Rail. Once Osbornehad completed and pre-loaded the new abutment, we returned to remove the Mass 50 trestles and Hymat Jacks.

In keeping with the MFF One Team Wessex ethos, we worked closely with the client to establish a means of installing a permanent beam whilst maintaining the integrity of the existing structure, and ensuring that the infrastructure was not affected by delivering the project to a tight timescale.

Thank you for your help and support with this project. The night of possession went really well and seemed fairly straightforward which was most definitely helped by meticulous planning.