Mabey Hire played critical role in the construction of the approach spans – its biggest UK Hire project to date.

Leading bridge and engineering services specialist Mabey Hire has today announced its role as the biggest provider, designer and supplier of temporary supports to the landside structure on the new Mersey Gateway Bridge, a multi-million-pound transport scheme between Runcorn and Widnes across the River Mersey. With Mabey Hire’s support, the three-and-a-half-year construction programme has been completed ahead of time and below budget.

Opened to the public on Saturday 14th October, the new two-kilometre, six lane toll bridge has been built to relieve traffic and congestion at the existing Silver Jubilee Bridge. Until this point, over 80,000 vehicles were using the Silver Jubilee every weekday; ten times the number it was originally designed to accommodate [1]. The improved transport link will also enable further regeneration of the Halton area, with easier, quicker access for local building and improvement works. 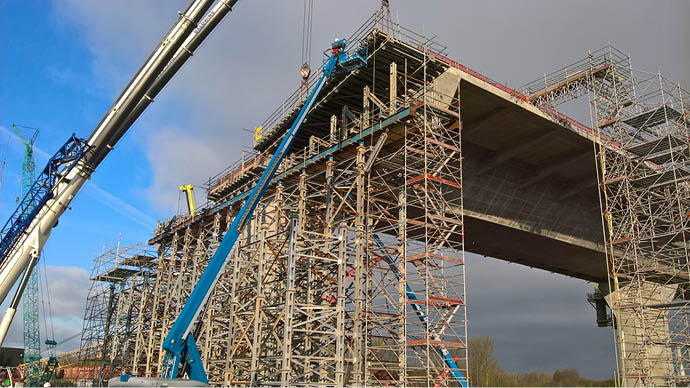 Mabey Hire was contracted by Merseylink to provide temporary supports for four out of the eight landside sections, which create the approach to the bridge, the largest being the Astmoor and Bridgewater viaduct. The engineering firm’s role was critical in supporting the bridge loads from the pre-cast concrete beams and cast in situ cast diaphragms onto the permanent concrete piers, using its temporary propping system to transfer the load of the bridge. This included developing a unique test rig for every pier arrangement to guarantee it was structurally safe for the heaviest applied loads.

With its team, equipment and technology based just a few miles away in Garswood, Mabey Hire had almost every element of its propping solutions in place at its peak, including the Superprop, Mat 125, Mass 50, Mass 25, System 160, hydraulics, monitoring equipment, together with other specialist equipment. This equalled over 2000te, with 65 people working on site at its busiest time.

The company implemented monitoring throughout the construction phase, which helped facilitate the transfer of the bridge loads from the temporary propping system onto the permanent works and ensure even distribution. The process was monitored by Linear Variable Differential Transformers (LVDTs), a sophisticated piece of technology that monitors movement and load. This allowed Mabey Hire to de-jack the loads with full control and in a synchronised manner.

Jim Rice, Senior Operations Manager, Merseylink comments, “The Mersey Gateway Project signifies a major step forward in the regeneration of the North West. Mabey Hire’s role in this project helped us overcome a number of challenges, such as determining access arrangements and the specific method we would use to install the pre-cast concrete beams and avoid over-stressing the temporary propping system.” 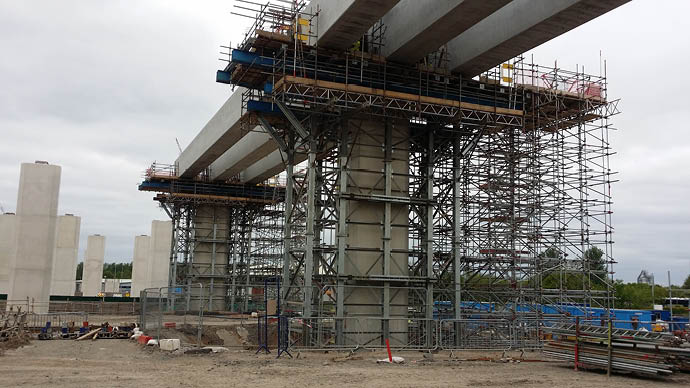 Gordon MacDonald, CEO, Mabey Hire comments, “Our proactive approach to providing the right resource, labour, engineering and facilities is what has enabled this project to be carried out more quickly, safely and efficiently. Working with Merseylink, we quickly identified and overcame design and test loading challenges to keep the project on track. As our biggest UK Hire project to date, the opening of the Bridge marks an iconic and proud moment in Mabey Hire’s history.”

The Mersey Gateway Bridge is a new six lane toll bridge over the Mersey between the towns of Runcorn and Widnes and will open to relieve the congested and ageing Silver Jubilee Bridge. Both the new Mersey Gateway Bridge and the Silver Jubilee Bridge will be tolled, but they will be free for eligible Halton residents to cross providing they have registered with merseyflow.

The Mersey Gateway Project signifies a major step forward in the regeneration of the North West. Mabey Hire’s role in this project helped us overcome a number of challenges, such as determining access arrangements and the specific method we would use to install the pre-cast concrete beams and avoid over-stressing the temporary propping system.